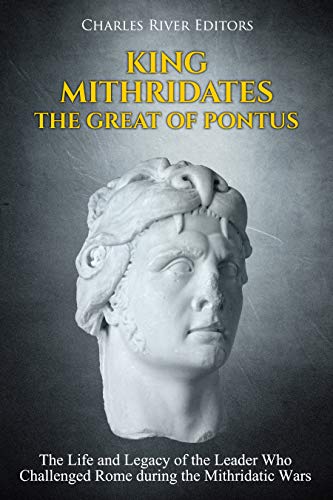 King Mithridates the Great of Pontus: The Life and Legacy of the Leader Who Challenged Rome during the Mithridatic Wars por Charles River Editors

Charles River Editors con King Mithridates the Great of Pontus: The Life and Legacy of the Leader Who Challenged Rome during the Mithridatic Wars

*Includes pictures*Includes excerpts of ancient accounts*Includes a bibliography for further reading*Includes a table of contentsRome faced many formidable enemies over the course of nearly 1,000 years, but perhaps none are as enigmatic and forgotten as King Mithridates the Great of Pontus. Despite numerous ancient sources detailing the life of the foreign monarch and his wars with Rome, and despite being an interesting character who endured years as a fugitive in his youth, enjoyed a fascination with poisons, and held mercy and pragmatic ruthlessness in a delicate balance, very few scholarly books and works have been produced about him. It may be that his largely unsuccessful military campaigns have contributed to his disappearance from active historical examination, but despite his poor record in engagements against the Romans, he dominated much of Asia Minor in the 1st century BCE, and the Romans themselves considered him one of their most dangerous enemies. In fact, upon his death, the Roman soldiers felt that “in the person of Mithridates ten thousand enemies had died.” Mithridates was not a significant threat for his great skills on the battlefield, but rather for his shrewd, calculating nature, his relentless persistence, and his indomitable will. For those qualities and the wars that he fought against Rome over the course of more than 40 years, he was certainly an important character in the 1st century BCE, one of the most important eras in history. It took three of Rome’s most famous generals - Sulla, Lucullus, and Pompey (all of whom earned a biography in Plutarch’s Lives of the Noble Greeks and Romans) - to finally subdue him. In the end, he was not defeated by any external enemy, but by himself. King Mithridates the Great of Pontus: The Life and Legacy of the Leader Who Challenged Rome during the Mithridatic Wars looks at how Mithridates and his kingdom rose in power and became one of the Roman Republic’s most legendary enemies. Along with pictures depicting important people, places, and events, you will learn about Mithridates like never before.
Libros Relacionados